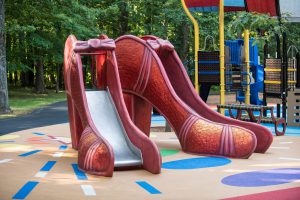 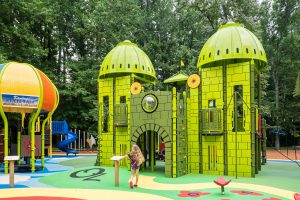 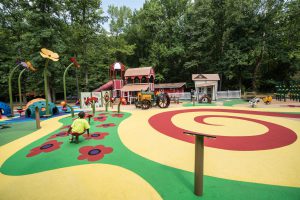 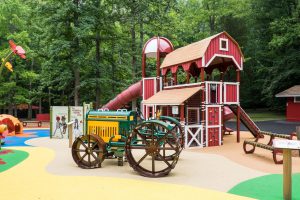 Watkins Regional Park in Upper Marlboro, Md., is an 800+-acre park that attracts more than 1 million visitors throughout the course of a year. Part of the reason the park sees so many visitors is because the Maryland-National Capital Park and Planning Commission (MNCPPC) hosts many community events there. The other is the recently updated play space.

“This was a huge playground project, and we wanted to do a cool themed playground,” explained Brenda Iraola, landscape architect supervisor with MNCPPC. “A staff member came up with the idea for the Wizard of Oz, and I designed the space with two other landscape architect’s (Chris Colvin and Rene Albacete) to create a unique theme based on the original Oz storybook, which the famous movie was later based on and is seen all across the world.”

A Design Found in Storybooks

After completing other large-scale successful themed playgrounds including the Indian Creek Playground and South Bowie Community Center, Brenda reached out to [email protected] to discuss her team’s ideas.

“They had the confidence in us that they would see the design and know that it would translate to the playground.”

“One of the interesting components we used to make this playground come alive was the poured-in-place safety surfacing,” said Brenda. “We decided to make children feel like they were actually in the storybook walking on the yellow brick road, which Dorothy follows to find her new friends.”

One of the unique things about the Wizard of Oz-themed playground is that Brenda and her team incorporated learning elements into the fun. Toto’s doghouse was designed to help teach kids ages 2 to 5 about colors. Climbing grips were custom manufactured as dog bones in various colors and labeled so can learn color names as they climb. Even more, the hot air balloon-themed playstructure has word search panels so kids can find the important words in the storybook—Wizard, Oz, Scarecrow, Dorothy, etc. And it offers an opportunity for younger kids to get more familiar with their ABCs. The theme and the activities throughout the playground help promote literacy and encourage children to read the storybook. Replica pages from the 1899 book were placed as signs in the playground to represent what happened in the storybook.

The new playground at Watkins Regional Park opened in July 2015, which pulled visitors from all over Maryland, Virginia and Washington, D.C. And since its opening, the playground has been the main attraction at the park.

“I have never seen anything like this playground. The kids’ faces just light up like it is Christmastime.”

“We have 80 to 90 kids playing on the playground at any single point throughout the day,” explained Darrell Oden, maintenance superintendent at MNCPPC. “Along with the playground upgrades, we painted the five existing shelters to resemble barns and upgraded the asphalt pathway to make access easier. The playground has truly become the destination point within the park.”